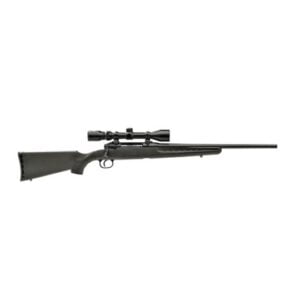 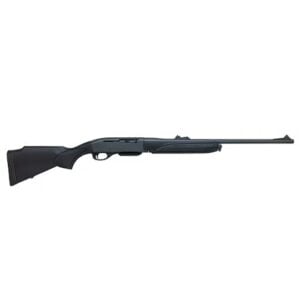 Known for its reliability, the Savage Axis XP Bolt Action Rifles are great for hunting and target shooting.

The Savage Axis XP is a relatively new entrant into the bargain rifle category. Previously called the Savage Edge, the Axis is a modernization of the Savage 110 bolt action rifle in order to reduce costs while maintaining the generally excellent accuracy that Savage rifles are known for. It’s also a departure from the previous strategy of using the Stevens name as a “fighting brand”. That sells the most discounted goods and is slightly disassociated with the main brand. The Savage Axis XP makes for a great beginner or backup hunting rifle but is quickly seeing competition catching up.

Even with a recoil lug that sits in the rifle instead of the action, these rifles produce fantastic groups. All 4 rifles I’ve laid my hands on will do 0.75-1.25″ groups at 100 yards all day long. There are plenty of rifles in the $1000 range that can’t print groups like this, and the Savage will do it out of the box, with factory ammo. There is nothing left to say here, Savage rifles are the most accurate for the money.

There are little or no issues with general use, but had a few things that really needed looking into. The grip is a bit long and hard to re-position. The safety itself is fine, a big no-nonsense unit with 2 settings. But the fact to re-position to access it with the thumb was a bit of a pain. The bolt is similar to other Savage bolt actions; they’re incredibly easy to use and never really jam and are smoother than the bolts on the Ruger American or Remington 783. The sided ejection port design of the Axis action is good. Because it just makes sense and is stiffer/better than the open-top actions. It should also do a better job of keeping dirt/debris/crap out of the more sensitive parts of the action. The stock. . . The molding on the grip and forearm look tacky. And the stock really makes this rifle look worse than it should.

The Savage Axis XP magazine is a combination of a metal body and feeds lips and a plastic bottom with a built-in magazine catch. Savage’s center feed magazines are fine but also have a plastic magazine catch. Again, this is one of the costs of making a sub rifle and if you dislike plastic catches, you’ll have to move up to a more expensive model. From images of the Remington 783, it looks to do the same thing. Loading and unloading the center feed Savage magazines isn’t quite as fast as their older open double stack design, but it isn’t too far off either. The feed lips on the center feed mags also let you “snap in” rounds from the top very easily, so loading isn’t all that bad. Throwing the mag into the mag well isn’t a slam dunk, and you can hear a click, but not have it in all the way. It also has plastic catches on the rear of the mag that holds the metal body.