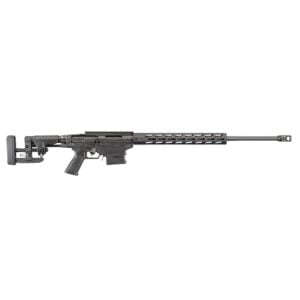 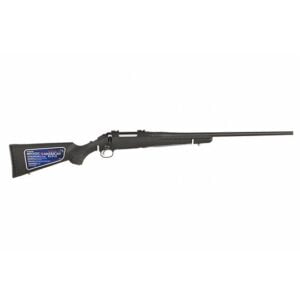 The Ruger Precision Rifle is a bolt-action rifle introduced by Sturm, Ruger & Co.

The barrel is tipped off with the Ruger Hybrid Muzzle Brake, which minimizes barrel flash while at the same time mitigating noise and blast to the left and right of the shooter. Neighboring shooters who have been on the receiving end of muzzle brakes without blast mitigation in mind will appreciate the RPR’s reduced signature.

The base model Ruger Precision Rifle .308 Winchester is 42.75” inches long with its stock extended, three inches wide, and 7.3 inches high. The rifle can fold its stock to the side, cutting length to an impressive 31.6 inches. The rifle weighs 9.8 pounds, and with a suitable scope and bipod will probably weigh just under thirteen pounds.

This rifle is built to be accurate. After all, precision is its middle name! Out of the box, with the addition of a quality scope, this rifle will hit IDPA targets at 600 yards consistently. It will unquestionably reach out to hit targets at 1,000 yards.

The best part? It comes with adjustable components that are easily adaptable to the individual shooter. Undoubtedly giving you a comfortable and consistent shooting profile for maximum precision.

It’s dead-on accurate. Stack it with proper optics and a bit of training, and it’ll be a sub-MOA rifle for just about any properly experienced shooter. If you are not hitting your targets, it is your fault… not the rifle.

The action of the Ruger Precision Rifle 308 is particularly simple and reliable.

One point of contention is that the action is not always intuitively smooth. If any downward pressure is applied on the bolt as you start your push forward after the rear stroke, the forward stroke can become notchy and slightly bind.

With some practice and breaking in, this issue should dissipate. However, the Ruger Precision Rifle chassis allows you to quickly install a new action with just the turning of a few screws if you should so desire.

This system has the action directly attached to the chassis, which keeps the action stable and keeps the barrel away from moving supporting components.

Meanwhile, the Ruger Precision Rifle 308 for sale comes with a fully adjustable rear buttstock and recoil pad. This buttstock can be quickly and simply adjusted for length with a simple movement of the rear throw lever.

The buttstock is easily folded with the press of a button at the rear of the receiver, making this rifle easier to transport or store in confined spaces. The toe of the stock also has a rail section for adding a monopod, if desired.

The entire buttstock mechanism is an uncovered skeletal design. That is exposing to the elements and could be snagged on; branches, weeds, and other hazards.

On the top of the buttstock is a small cheekpiece that is adjustable. That is both horizontally and vertically. Thereby ensures the shooter has a correct alignment of the eye to the scope and target.

This cheekpiece is made of a textured Kydex material. Equally has a plastic feel to it. Though it seems to be sturdy.

The trigger on the Ruger Precision Rifle excels.

It is a bladed trigger. Which some shooters may not like. But the pull weight is easily adjustable with an Allen wrench that comes with the rifle.

Ruger says the trigger is adjustable from 2.25 pounds to 5 pounds. However, comes from the factory at about 2.5 pounds.

The safety is an AR-style 45-degree lever, which most shooters know and are comfortable using. The safety does not lock that bolt, so the rifle can be cycled while the safety is on.

The Ruger Precision Rifle 308 for sale comes with two 10-round Magpul polymer magazines. (It also accepts AICS magazines). The magazine release lever is directly in front of the trigger guard.

However, cannot remove magazines unless the bolt is open and pulls all the way to the rear. The empty mag also prevents the bolt from going forward. Until the magazine drops or inserts a loaded magazine.

You may not like this if you want to manually feed single rounds in the chamber. If that is your thing, then I recommend choosing another rifle.

The .308 Winchester and the .223 Remington versions have a barrel length of 20 inches. Equally with the 6.5mm and 6mm Creedmoor being longer at 24 inches.

The overall length varies, due to the adjustable buttstock, being about 43 to 47 inches. Weight is approximately 10.7 pounds, depending on the configuration.

The Ruger Precision Rifle 308 for sale comes with Ruger’s hybrid muzzle brake. In the same way, does an admirable job of controlling the recoil of this heavy rifle.

Since the barrel is threaded, you can easily put on any muzzle device you like, if desired.

The Ruger Precision Rifle for sale comes with a threaded barrel and a threaded bolt handle. Consequently, so customizations are easy.

It is also modular and equally easy to customize to each individual shooter using readily available AR components.