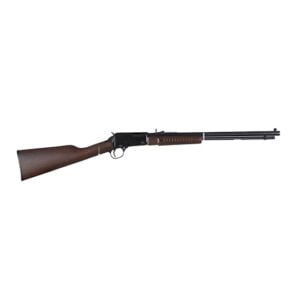 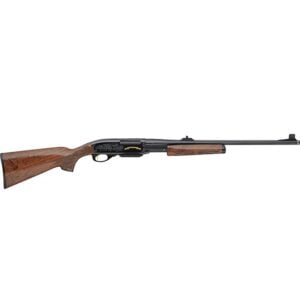 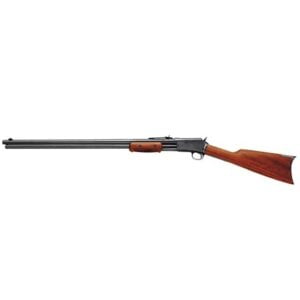 The Henry pump action octagon .22 joins faded jeans, Moms apple pie, a restored ’57 Chevy as an all American icon. Now fitted with a blue octagonal barrel, it resurrects the great old days of the traditional shooting gallery. The Henry Pump Octagon, available in calibers .22 LR or .22 Magnum, is one gun that is built for fun. It also sports a grooved receiver for mounting a scope, and Marbles semi buckhorn fully adjustable rear sights with standard 3/8 dovetail slots enabling you to change sights if you choose to do so. Beautifully finished American walnut is used for the stock. The .22 LR version can hold 15 rounds of .22 LR and as much as 21 rounds of .22Short. The capacity of the .22 Magnum is 12 rounds.

Henry Repeating Arms is legendary for producing high-quality lever-action rifles in a variety of chamberings and configurations, as well as supporting worthwhile causes with limited editions. The Henry Repeating Arms Pump Octagonal .22 LR Rifle deserves a lot more recognition than it gets. Although the numbers indicate it has not escaped the attention of knowledgeable enthusiasts.

The Henry Repeating Arms Pump Action Octagonal .22 LR took third-place honors of the pump-action rifles for overall sales in 2019. It claimed second in 2018, third in 2017, and is a perennial contender for top billing. When American Rifleman tested the rimfire in 2010 the precision in manufacturing and attention to detail was obvious. The story concludes, “…this is a well-made rifle with excellent function and accuracy at an especially attractive price.”

With a current MSRP for the .22 Short, L. And LR-digesting version and for the .22 WMR model, there’s no denying part of the popularity of the Henry Repeating Arms Pump is valued, but there’s a lot more. With a 20- or 20.5-inch octagon blued steel barrel, respectively, both models have a classic and distinctive look. Combined with American walnut furniture the look is timeless.

The barrels have a 1:16 inch rifling twist and both versions weigh in at 6 pounds. The length of pull is 14 inches and the external hammer has a 1/4 cock safety. The firearms use a tubular magazine with capacities that run from 12 rounds in the magnum model, or 16 to 21 in the other, depending on the cartridge.

As for reliability, as our original review noted, “The Henry Repeating Arms Pump functioned flawlessly, and all loads fed through the action with zero failures or malfunctions. Even when the magazine was filled with mixed cartridges from different manufacturers, the Henry would feed and function perfectly.”