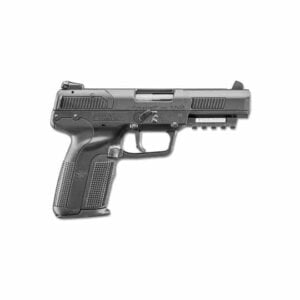 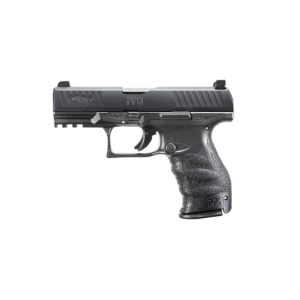 The FN Five Seven is genuinely a unicorn of the gun world. It is a lightweight polymer pistol that shoots FN’s own 5.7x28mm round.

When NATO requested an alternative to the 9x19mm, FN Herstal was the first to respond, presenting the 5.7x28mm cartridge. FN Herstal initially developed the 5.7 round for the P90 until the Five Seven pistol production in 1998.

In the early 2000s, NATO conducted tests to standardize a personal defense weapon round and replace the iconic 9mm.

The 5.7x28mm indeed impressed—it was highly effective, performed at extreme temperatures, and could even be manufactured on the same production lines as the loved 5.56x45mm NATO round.

The FN Five Seven for sale is a full-sized pistol and a compact-sized weight. It has a nearly wholly polymer frame with some small steel internal components.

While the grip is considerably thinner than most full-sized pistols and a bit long, which could be uncomfortable for some hand sizes. It features ambidextrous controls conveniently placed for thumb or trigger finger manipulation.

The FN Five Seven Pistol has adjustable rear sights for both windage and elevation, which is essential because of the round’s uncommon ballistics.

Since the 5.7×28 cartridge is so tiny, it is easy to fit much ammo into a single magazine, especially when using a double stack-double feed design.

The design of the magazines is equally brilliant and lightweight. They similarly hold 20 rounds and load to standard AR magazines–you push the round straight down instead of maneuvering it in and under like in most pistol magazines.

The FN Five-SeveN pistol is also easy to disassemble with a simple takedown lever.

Shooting the FN Five Seven for sale is an absolute BLAST. Imagine the almost non-existent recoil of a .22 LR juxtaposed with the noise of an AR.

The lightweight frame makes for a comfortable range session while magazines are a breeze to load.

The FN Five-Seven has a sleek and almost futuristic look to it. It comes in either an all-black finish or a tan frame and black slide. The rail can be outfitted with a flashlight, and aftermarket night sights are also available for purchase.

The 5.7x28mm cartridge was designed to meet a goal, and in that role, it is unequaled – but the Cold War is over, and the need for armor penetration in an EDC is limited at best. It is incredibly lightweight, has a decently heavy trigger pull and safety, very high magazine capacity, and adequate stopping power.